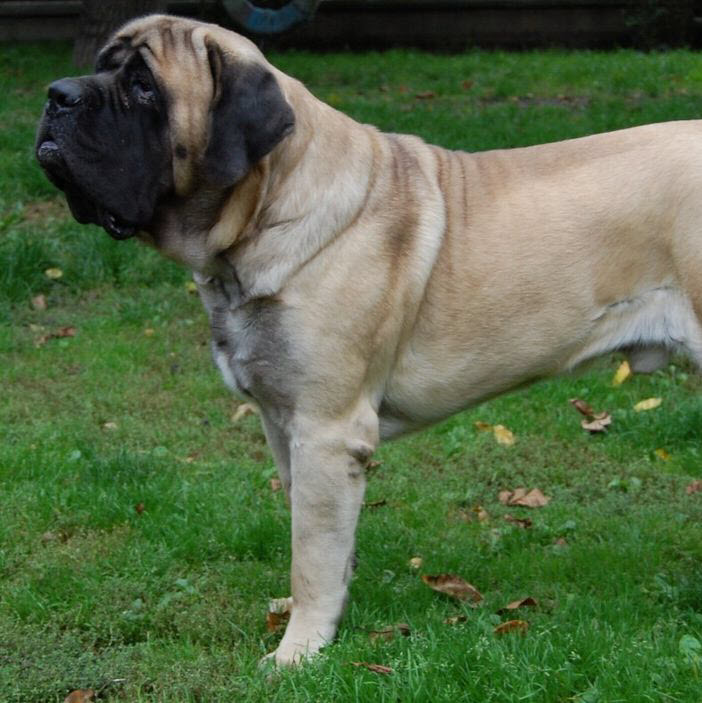 All About the English Mastiff You may describe an English Mastiff as Large, Huge, Giant, or nothing less than ‘Really Big’. In fact, it can be speculated that the Mastiff get’s his breed name from the Anglo-Saxon word for powerful – “masty”. The English Mastiff is known as the “heaviest dog in the world”. When people conjure up a picture of the English Mastiff type of dog when they think about “Mastiff,”. There are in fact many types of Mastiff but the English variety is the most popular. The English Mastiff is a breed of dog with a large body which descended from the ancient Alaunt through the Pugnaces Britanniae or the War Dog of Britannia. In this breed is found the qualities which are generally found among most of the Molasser type breeds.

During the early years of this majestic breed – extending as far back as the sixth century BC – the mastiff was used for all types of battle scenarios. The Mastiff was used in many legendary blood sports including, lion-baiting, bull-baiting, and bear-baiting as well as head to head dogfights.


It has been said that the English Mastiff breed is the paradox of the k9s; being that is Loyal and calm, yet ferocious and fearless; loving and caring, yet an aggressively on guard. An English mastiff will instinctively position itself between his owner and stranger if the person approaching is unknown to the family’s “territory”. If the stranger approaching will not back down, The Mastiff will take further defense, and quickly subdue the stranger. You now see why the Mastiff is Ranked high as guard dogs. Loyal and courageous you will feel protected as an English Mastiff owner. When it comes to Children the Mastiff is very gentle.

The presence of an English Mastiff has an impact on all she/he meets. With the average male Mastiff standing 20 inches from ground to shoulder and females a little bit shorter standing at about 27.5 on average. It’s quite common to see a male English Mastiff Scaling in weight from 160 to 235 pounds, with the opposing gender being a bit smaller, weighing in at 140 to 190 pounds or greater.

Like any other pure bread dog, you should be aware the English Mastiff has its own genetic health issues. These range from dysplasia to Bloating, and they can easily become obese. However, you can simply manage the weight of the English Mastiff by feeding your dog two to three rationed meals a day. This breed is also known for a higher degree of bone cancer susceptibility, and kidney stones.  However, with proper care, your English Mastiff can remain happy and healthy and live to average age nine to eleven years old.

Getting to Know Your Mastiff

The responsibly of the Mastiff health is solely on the owner (or owning family). With a well-balanced diet and abundance of ‘play time’ exercise, your Mastiff will even live beyond its ‘average years’. Be forewarned that the mastiff can, like humans, enjoy being lazy, and quite comfortably lounge around the house. A good owner will even coax the dog off the couch and take him/her for a run in the park.

Because the English Mastiff breed has short hair, grooming is straightforward. Brushing him daily with a bristle type or one of those rubber glove types will do fine. The purpose of this is to remove the dust, dirt, dead hair and skin; if not removed could lead bad order and skin problems. It is highly encouraged that all Mastiff owners make this a daily habit.

If you schedule your brushings at the same time every day, your Mastiff may even remind you that it’s brushing time with a gentle nudge. The English Mastiff is one of the most affectionate of breeds and really loves the attention and feeling of a good brushing. This is also a good time to bond.

The English Mastiff is not just the biggest dog, but has a huge heart; one that he is just waiting to give to you for a Mastiff lifetime. The Mastiff like the name sounds is a massive dog that comes in many varieties and from all over the world. These dogs are usually used for guarding purposes due to their intimidating stature. To their masters and family, the Mastiff breed is a very docile and affectionate companion. Popular Types of these dogs include the English Mastiff, BullMastiff, Cane Corso Mastiff, Neapolitan Mastiff and the Dogue De Bordeaux. Mastiffs have been around ever since 3000 B.C. and in Rome, they were used for bull baiting and other game purposes such as attacking lions. The mastiffs were fearless and powerful that even Julius Caesar was fond of them. It was Cesar who introduced Mastiff’s captured from Britain to Rome. As Mastiff’s gained popularity amongst common people and farmers they were used to protect livestock from wild animals such as wolves, foxes, and hyenas.

Mastiffs were first entered into the American Kennel Club in 1885. The alternative breed recognizations include the FCI, ANKC, CKC, UKC, and NZKC. The Mastiff breed we know today is a gentle giant and requires minimal exercise to thrive but still needs space due to their size.

English mastiffs are gifted with a large body, a broad skull which forms a head with a square appearance. In terms of mass, it is among the largest dog breeds. Only a few breeds are taller, namely the Irish Wolfhound and the Great Dane. These two breeds, however, aren’t as robust as the Mastiff.  The American Kennel Club has set a standard height for the Mastiff. The males stand at 30 inches at the shoulder, and the females stand at 27.5 inches minimum. Dogs of this breed can weigh no less than 150 pounds and as much as 250 pounds for males and120 to 220 pounds for females. With their massive bodies, they are generally seen as figures of power and strength. Their bodies are formed with great depth and breadth, especially between the forelegs.

Mastiff coats are usually short and close-lying. A few Mastiff breeds, however, do have long hair. Sometimes, these long-haired Mastiffs are called Fluffies. Their coat is fine and smooth and requires very low grooming. The color of their coats are generally apricot to fawn, silver-fawn, fawn, or a brindle. Kennel clubs specify that for a standard Mastiff appearance, the dog’s muzzle, ears, nose, and around the eyes should always be with black shades.

It is sad to say that the Mastiff breed has one of the lowest life Span’s amongst dogs probably due to their enormous size. They are also prone to hip problems that are common in large breed dogs. Mastiffs are one of the favorite dogs amongst the English people and their price can range anywhere from $1000 – $2500 for a pup from a quality bloodline.

What About the Temperament of a Mastiff Breed? What the Mastiff is known for is the breed’s dignity and courage. Dogs from this breed are calm and affectionate to their masters but are very protective. The English Mastiff, in particular, is a very good guard dog. Dogs of this breed display extreme courage and loyalty and are known to stand in the way of a perceived stranger and its master whenever it feels that the latter is threatened in any way. Though they are not aggressive, the warning they make should be taken as a signal for the stranger to back off. In the case that the stranger does not, these dogs are known to take defensive action – not even larger animals are known to deter it from its desire to protect its master. It is because of this natural protectiveness that English Mastiff Dogs also have the reputation of being among the world’s top guard dog breeds.

All Mastiff breed like the Cane Corso Mastiff is very protective of their owners and are territorial. If they do not know a person the pack leader will have to welcome that person in using touch so that the dog can put his guard down. The Mastiff will not attack an intruder unless you are in danger they will lightly send out a warning growl as to say “stay away from us, we don’t trust you yet”. It is very important to recognize that not all Mastiff’s despite their description are good with children. Examples of Mastiff breed that may not tolerate children include the Cane Corso Mastiff and the Bull Mastiff. These two Mastiff breeds will need to be socialized at a very young age and taught to tolerate children. There was a recent story on the news where a Cane Corso killed a 4-year-old child in Brooklyn and the owner was to blame for the mistreatment of the dog. Mastiff’s like most dogs will have the need to belong to a pack and you the owner will have to make sure all members of the family comes before the dog. The Cane Corso Mastiff will display dominance and may bite hard during puppy stage which will need to be corrected immediately.

Caring for Your Mastiff

Mastiffs grow large very quickly, therefore, it is better to feed them a diet low in protein. If a large breed dog grows too quick it can have bone and joint complications. Mastiffs don’t grow out of their puppy stage till they are about 3 years of age, therefore, early obedience training is crucial. You do not want to end up with a dog that may weigh more than yourself not listening to you. Mastiffs are a great good to have but only for the suitable owner who can keep the breed in check.

This is not a dog breed that can be tamed by just about anyone. First-time dog owners should reconsider their choice if they are planning on taking care of this proud breed. English Mastiffs naturally desire to follow someone whom they can accept as higher in order and stronger than them. This being so, they need a master that is confident and consistent with the rules that are imposed. Still, through proper training and socialization at an early age, and with the right master, English Mastiffs are good-natured, gentle, easy going, and calm. In spite of its size, it can do well indoors as long as it is taken out on regular walks daily.