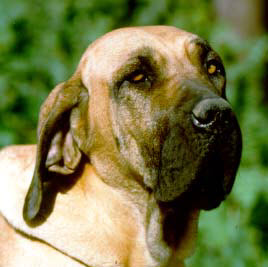 All About The Fila Brasileiro

The Brazilian Mastiff – or the Fila Brasileiro, to give them their others names – were brought to South America by the Conquistadors and eventually became best known as Brazil’s national dog. The ancestors of this dog included Bloodhounds, Mastiffs and bulldogs of European origin, which Conquistadors had taken with them. The first Fila Mastiffs were bred from the Mastiff and the Bloodhound, giving it the strength and bravery of the Mastiff with the scenting ability of the Bloodhound. Because of their unique traits, they were primarily bred for and used as working and guard dogs, to protect cattle from cougars and protect the plantations of Brazil. 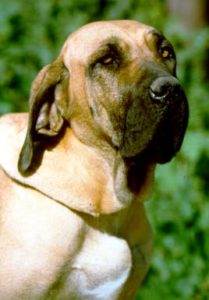 They are a large dog, standing between 27 to nearly 30 inches tall at the shoulder, and weighing no less than 100 pounds. Females are slightly smaller, with the female Brazilian Mastiff weighing approximately 90 pounds, with a height around 24 to 28 inches.

The coat of the Brazilian Mastiff is short and smooth. Colors include solid yellow, reddish tan, as well as black and brindled colors. There are plenty of mastiff pictures on the internet if you want to check out their appearance.


The Brazilian Mastiff is a cross between a Mastiff and a Bloodhound. The product of this breeding process is a dog who combines the incredible scenting ability of the Bloodhound with the amazing fearless power of a mastiff, which combination makes the Brazilian Mastiff well suited to defend the cattle ranches of the Minas Gerais region. He offered protection against cattle rustlers and wild jaguars, which would prey on the cattle.

The Brazilian Mastiff was also to prove very popular on hunting trips. They could track, attack and then hold the intended prey until his owner arrived. In fact, the name Fila (in Fila Brasileiro), comes from Portuguese for “to hold.” Less glamorously, at one point in the history of the breed and the country, these dogs were used to track and capture runaway slaves.

Fila Mastiffs are solidly built, with big bones and loose skin. They have short, smooth coats that are very easy to take care of, and are often tan, brindled, or yellow in color. These dogs are typically very large, reaching up to 30 inches at the shoulder and weighing up to 110lbs. Their size has not only made them very formidable as guard dogs, but as favorites in family homes and the showroom. If you examine closely the leg and spine joints of the Brazilian Mastiff, you can see what made this dog such a great tracking dog. The joints are loose. This allows the dog to change course extremely quickly, even at full-gallop. 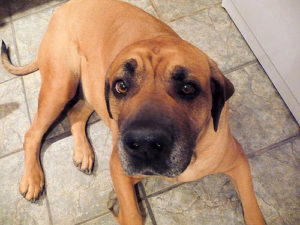 What people really love about the Fila Mastiffs, however, is not their appearance but their temperament. Fila Mastiffs are fiercely loyal and protective even as early as their puppy stages and tend to be very wary of strangers. These dogs were specially bred to be unfriendly to strangers and will protect their master from any and all harm. In some dog shows, one of the criteria for judging Fila Mastiffs is that they should not let the judges touch them.

What you have to remember when it comes to the Fila Mastiffs is that they are not dogs for beginners. Owners always need to be the dominant partner in the relationship to be able to control these dogs, or they will become undisciplined and may even attack random people off the street. There are some countries where the breed is banned for their rough nature. Fila Mastiffs also tend to be very energetic when they are young, and only quiet down at adulthood.

If you plan on getting one, then make sure that you know exactly what you’re getting into: you will need to get them used to socializing and wean them out of the instinct to chase after prey. Fila Mastiffs can be aggressive to other dogs when not socialized properly, so remember to go out often.

The upside to it is that they are easy to maintain, especially when they reach adulthood. They do not shed, are not picky eaters, tend to be quiet in adulthood, and are not fussy in nature. If you don’t have any problems controlling your dog and keeping them occupied, then you’ll find yourself a good and protective partner in the Fila Mastiff.

More About the Fila Brasileiro Breed 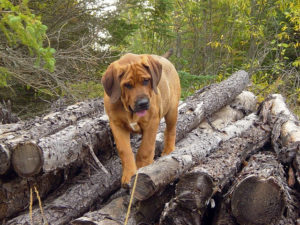 Fila Mastiffs are best bought from breeders to ensure the purity of the line. There are many breeders now that breed Fila Mastiffs with the English Bullmastiff to give them a gentler temperament. This line of Fila Mastiffs are better for households with young children, but people who want their Fila Mastiffs pure and true should take this opportunity to examine the family tree of their pup of choice.

The dog is probably the only breed that was purposely selected for its actual dislike of strangers. In fact, temperament tests are run during championships. The tests include the ability to attack without being instructed, to remain self-confident during a shooting test, and to demonstrate their dislike and suspicion of people they don’t know.

The standard for this breed during a dog show specifically states that the Brazilian Mastiff should not “allow the judge (representing a stranger) to touch it.” The standard explains that should the dog attack the judge, this action must be considered a fault, but only a confirmation of its temperament. But even though the dogs are bred to be aggressive towards strangers, the Brazilian Mastiffs are surprisingly gentle with their own families. As with other types of Mastiffs they are tender and affectionate with the family they are charged to protect.

The Brazilian Mastiff is by nature a ferocious guard dog, bred to actually distrust and dislike stranger. This means he needs more supervision and understanding than your average dog. So you will have to think very seriously before introducing one to a purely domestic environment.