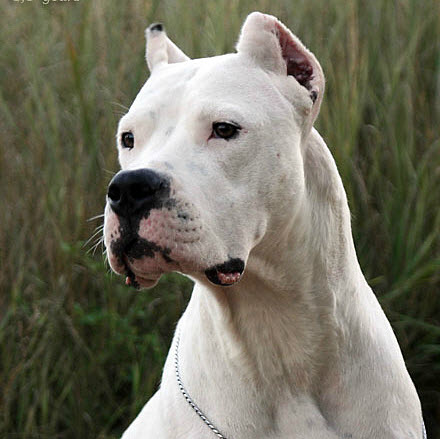 The Argentine Mastiff, also known as Dogo Argentino, Argentine Dogo or Argentino Mastiff, was bred to produce the perfect hunting and working dog. The breed was developed in Argentina by the Martinez brothers, who wanted the dog to also have the characteristics of a loyal guard dog, who would defend their flocks, their lands, and their owners’ lives.

They started with the Cordoba fighting dog, which was the most popular hunting dog in Argentina in the early 1900’s, produced by crossing the Spanish Mastiff and the fighting bulldog. Over a period of nearly 30 years, the brothers gradually blended in 10 other breeds to produce the Dogo Argentino with the characteristics they identified as being right for their type.


These dog breeds were: Boxer for his intelligence and trainability, Great Dane for extra height, Bull Terrier for fearlessness, Bulldog for chest width and courage, Pointer to increase scenting ability, Great Pyrenees for size and white coat, Irish Wolfhound for hunting instinct and speed, Dogue de Bordeaux for strength of the jaw, and Spanish Mastiff, particularly the Pyrenean Mastiff, for his white coat and protective nature. In appearance, the Dogo Argentino is a well-muscled and graceful dog, capable of incredible bursts of speed. He is fearless and intelligent, and fiercely loyal to his owners. The Dogo does not enjoy a cold climate.

The male is around 62-68 cm at the withers, the female a few centimeters shorter. The male weighs between 45-50 kg., with the female a little lighter.

The Argentinian Mastiff has pure white skin, with a thick coat, a good chest, and a strong jaw. The Dogo Argentino is not ideally suited to the first-time owner, for he can be extremely boisterous and dog-aggressive and temperamental, and needs plenty of exercise. As a pup, he needs obedience training and early socialization with other animals.

There is a real problem with buying an adult dog since they do not transfer ownership at all well. They are bred to be fiercely loyal and protective of their owner, and switching owners or handlers will never be easy.

Regarding health issues, there can be a problem with hip dysplasia, and there is a characteristic congenital deafness. Also, in common with most all-white animals, there can be skin problems, including cancers.

The ideal Dogo Argentino owner, therefore, is probably an outdoor person with extensive grounds, who wants a dog for life, to serve as a guardian or working dog. If you have the right environment and living conditions, there can be few better, braver, fiercer, or more loyal companions and guardians. How To Reduce Cushings Diseases in Mastiff Dogs | Touch Of Serenity says July 19, 2019

[…] There are holistic alternatives that can provide in conjunction with the average options. In the argentine mastiff breed , I offer several you just can try that should […]