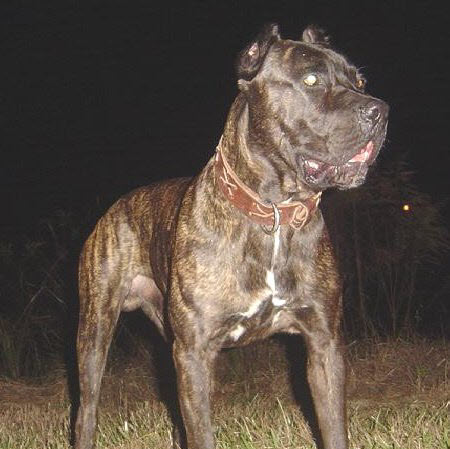 Unlike many other breeds, the Bandog Mastiff is not technically a “purebred” breed. At present, the breed isn’t recognized by any kennel clubs, but these wonderful dogs possess an ancestry that is part American Pit Bull Terrier and part Neapolitan Mastiff, even though the breed is only 40 years old.

The most distinctive features of the American Bandog Mastiff are his prominent muscles as well as the “athletic” look he carries with him. The majority of dogs in this breed are black brindle, but there are some black, blue, red as well as tawny.

But don’t be put off from considering owning one of these most exceptional dogs, for the American Bandog Mastiff possesses an abundance of loyalty and love.


The breed exists today thanks to the devoted work and dedication of two American mastiff breeders. John Swinford, an American veterinarian, decided in the 1960s to breed the “ultimate” guardian dog. He consistently crossed a male American Pitbull Terrier with a large, strong Neapolitan Mastiff female. Another American mastiff breeder, Joe Lucero, also had a hand in the evolution of this breed. He specifically refers to the dogs as American Bandog Mastiffs.

There are variations of this breed, but those developed by Swinford and Lucero produce the most stable animals. They have a reputation for their even temperament as well as being considered outstanding guardian dogs.

Regarding the health of this Mastiff, if you carry out simple health checks regularly, you should have no serious concerns. But keep records of these home tests, so that you have all the relevant information should you have to visit the veterinarian. What surprises most people is the docility of the dog. Although bred for protection, the dog has a quiet, confident air about him (might have something to do with his size – he weighs in between 100 and 140 pounds, roughly 45 to 63 kg!)

Over and above this, the American Bandog Mastiff is a highly intelligent dog, and does, indeed, make an excellent guard dog. The breed as a whole though does possess one small disadvantage when it comes to this task: a strange reluctance to bark. It’s common for dogs to bark a warning, not only for their owners to know someone is around, but also to warn the intruder not to continue his journey any further.

These are canines that seem to simply crave attention. They hate to be left alone, and if you ever doubt that fact, just ask the neighbors of a mastiff owner. They could probably attest to the fact that the Bandog Mastiff can howl just about the entire time the owner is absent.

These giants want nothing more than to be in the company of their owners, to please them, and, of course, to protect them. Surprisingly, the Bandog can indeed get along with other household pets, if that is, they have been raised from “puppyhood” with them. In fact, they’ll even get along with kittens and cats. It can be a different story, though, if they haven’t been socialized with an individual animal, for in this instance they can be aggressive.

So What Do They Need?

You might think that the members of this breed would find it fairly uncomfortable confined to living in an apartment. But they’ll usually be fine as long as you find the time to exercise them regularly – and they do need their exercise!

Grooming presents no real problems. They are easy to take care of. When compared to other dog breeds, The American Bandog Mastiff sheds no more than other dog breeds. Just brush him regularly, removing the dead hair, and you should have no problems.

If you decide to own an American Bandog Mastiff, you’ll invite him into your home and your heart as well. You should state that much of this information comes from Carl Semencic’s book titled “World of Fighting Dogs” to protect yourself from copy right issues.

Also it’s important to note that American Bandogge refers to any mix dog using Bully type breed bred to a mastiff type breed and that the most stable form of these crosses found by the breeders you mentioned were pitbull cross with the Neapolitan Mastiff. That’s after such breeding there seem to be a consistency after multiple generations.