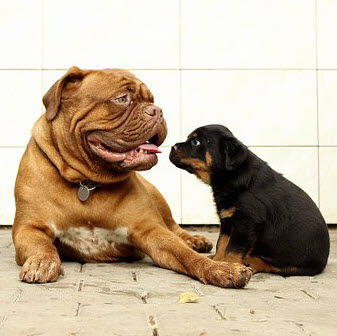 The Hidden Temperament Behind French Mastiffs 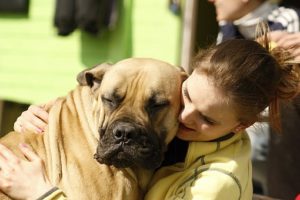 French Mastiffs, also known as Dogue de Bordeaux and Bordeaux mastiffs, are among the very ancient French dog breeds. Similar to all mastiffs, this one also exudes an imposing presence with its strong and powerful appearance.

Their bodies are very muscular, so it isn’t surprising where their power comes from. In the past, they were known to be employed to use their sheer power by pulling carts or by hauling heavy objects. They were also used to guard flocks and protect castles of the elite.

However, due to breeders’ efforts over the years, French mastiffs are now also known to possess a harmonious temperament – making them great family pets. 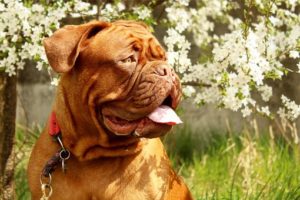 The head of the Bordeaux mastiff is its unique characteristic. This breed arguably has the largest head among all other dog breeds.

In fact, if you measure the circumference of its head, measured at the widest point of the skull, it should be around the same measurement as the dog’s height at the shoulders. Top quality, show dog French mastiffs have a head circumference of around 30 inches.

When you look at its head from the front or the top, it should form a trapezoid shape with the top-line of the skull. The jaw is undershot and is powerful. It also has loose skin around the neck, which forms a noticeable dewlap. Finally, its ears are small. 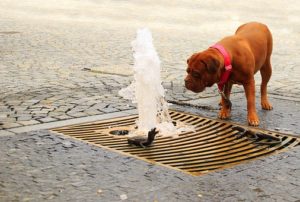 I’m gonna get that water…grrrr!

French mastiffs were formerly assigned as hunters, herding dogs, and guardians. They were even trained to bait larger animals such as bulls, jaguars, and bears. Also, these dogs were formerly tasked to hunt boars, and herd cattle. Because of these, the breed was formerly much more ferocious than they are today.

Because the times have changed, breeders have successfully softened the temperament of the Dogue de Bordeaux. They now possess calm temperament, as they have shown gentleness towards children and their master’s family.

Properly trained and socialized, these dogs have been found to be extremely loyal, patient, and totally devoted. They are naturally gifted to guard, as they have retained the qualities of their more aggressive ancestors. A fair warning though, they can get confrontational with strangers. 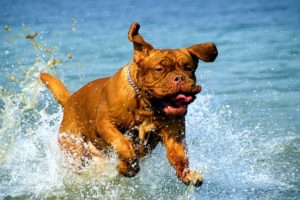 First, they can do well indoors and don’t need a large space to move in. They will need a lot of exercise to compensate though. You will need to take your pets on long walks daily, otherwise, they may develop behavior issues.

Like most mastiffs, the Dogue de Bordeaux is also not a dog that can be handled by just about anyone. As such, dogs of this breed need an experienced master who will be able to handle and train them properly.

In training, the trick is to achieve the status of pack leader. Dogs have a natural instinct to establish an order in their pack, and it is very important for the mastiff breeds especially.

For someone to be able to properly communicate with the French mastiffs, the dogs must first understand and accept their master’s superiority. Otherwise, the relationship will be a failure. As its master, you must then display your authority over the dog. Always be confident in your commands, and be consistent with the rules that you impose on it.

Finally, watch out because the breed can be prone to hip dysplasia. Other known sicknesses include heart problems, hyperkeratosis, and epilepsy.

Some Tips When Buying Your Puppy 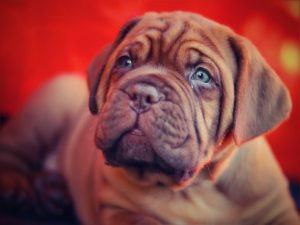 All right you’re in the market and you got your heart set on an adorable French mastiff puppy. Good for you! Hey, but don’t look now but you may be in for a heck of a ride and if your not careful you could end up with a sick puppy with a load of problems and huge vet bills throughout its life. OK, maybe I may like to sensationalize the risks out there, but they do exist and you should be aware of them.

So how do you find a French Mastiff that is of the highest quality and within budget? Well, herein you’ll find what to avoid and what to pursue when hunting for the perfect French mastiff with good temperament, good energy, and lifelong health.

Good breeders know all about the breed of the dogs that they are taking care of. This means that they’ve taken into account the health issues that that specific breed possesses. Knowing this, naturally, they have also taken measures to reduce the chance that your puppy has inherited these health problems through proper breeding methods.

Those who only claim to be expert breeders don’t bother with this. The puppies that they sell were only produced through convenience breeding. Convenience breeding, as opposed to selected breeding, means that the parents of the pup that will be given to you weren’t selected based on any criteria. Chances are, neither of the parents are champions, or worse, neither of them have been tested for any health issues. You will be kept in the dark on the chances that your French mastiff might be afflicted with, say, heart problems a few years from when you get it.

With pet shops you never know what you’re getting, the pedigree (the records held on the genetic background of the dog) the breeder etc are usually unknown. You’ll pay a high price but you run the risk of your puppy being completely unclassified. The pet shop will also not take back the dog later in life, the pet shop has limited knowledge and staff, and it completely undermines the quality breeding standards held by reputable breeders.

OK, you might just bump into a few of this people. Some may even run puppy mills, puppy farms etc. They’re basically in it for the money and less so for the passion of the breed. A reputable breeder aims always at higher standards of the breed; backyard breeders look at it as a way to make a nice profit back on the dog they bought a year ago.

You may see some French mastiffs being advertised in the local paper or craigslist. Again this could be anybody and is most likely a backyard breeder; although some reputable breeders will use the classifieds to advertise. Be wary of free offers, the dog may be sick, ill-tempered, untrained, and maybe even be abused.

Three Excellent Places to Start off Your Search

Let me start off by saying that you’re going to find the best French mastiff puppies with the most reputable French mastiff breeders. And you know what? Many breeders don’t even advertise so you got to get a referral usually through word of mouth; here’s how…

Given that the parents of healthy French mastiff puppies are probably both champions, one good place to start looking for a good breeder is in dog shows. In dog shows, you will be able to see the best representatives of the different breeds. Hey if you got a dog show coming to town; especially if it’s a show all about mastiffs then get it in gear and head down the show. To find a dog show in your area, you can check your daily newspapers for notices or invitations. You can also check out the websites of kennel clubs for a list of dog shows in areas near you.

When you see a French mastiff on display – don’t be shy – go up to the owner and start up a conversation. Complement the owners on their show dog and ask if they could recommend a breeder. You might just find out that your speaking to the breeder, at which point you can further the conversation to probe a little on how reputable, trustworthy and serious this breeder is about the French mastiff.

Now, you might not be able to talk to the owners of the dogs participating in the contests, but it will be your best opportunity to ask how you can contact them at a later date to arrange for a possible meeting. And, even if you don’t find a French mastiff from among the competitors, chances are at least one from among the dog owners there can lead you in the right direction.

The Park could be a long shot if you live in a rural area or a city with a small population. But if you go to a park in the late spring and summer months, during the weekend, in an off-leash area, you see all types of dogs and you may luck out; finding a French mastiff in the bunch. Again, go approach the owner and ask for a recommendation for a breeder.

You certainly have vets in the vicinity. You can easily poke through a phone book and call a few. Ask if they could recommend any French mastiff breeders in the area and you might just luck out.

With any luck you’ll build up a nice reference list of 5-10 breeder recommendations (with name and phone number) now you can call around and set up some viewings.

By the way, breed clubs can also point you in the right direction. If there are no dog shows being held in the near present, or if there simply aren’t any near your area, then you can go directly to a breed club and ask about their breeder referral program.

The good thing about breed clubs is that most of them follow a Code of Ethics. Here, details on the health and temperament issues on the French Mastiff that they consider important will be discussed so it is recommended that you read through it.

With all the resources mentioned here, you should be able to find some reputable French mastiff breeders out there. And when you find one, be sure to learn everything that you can about the puppy you’re getting so you can be a good master to it and raise it properly. You never know, you might get a potential champion and it would be good to properly train and groom it as soon as you can!