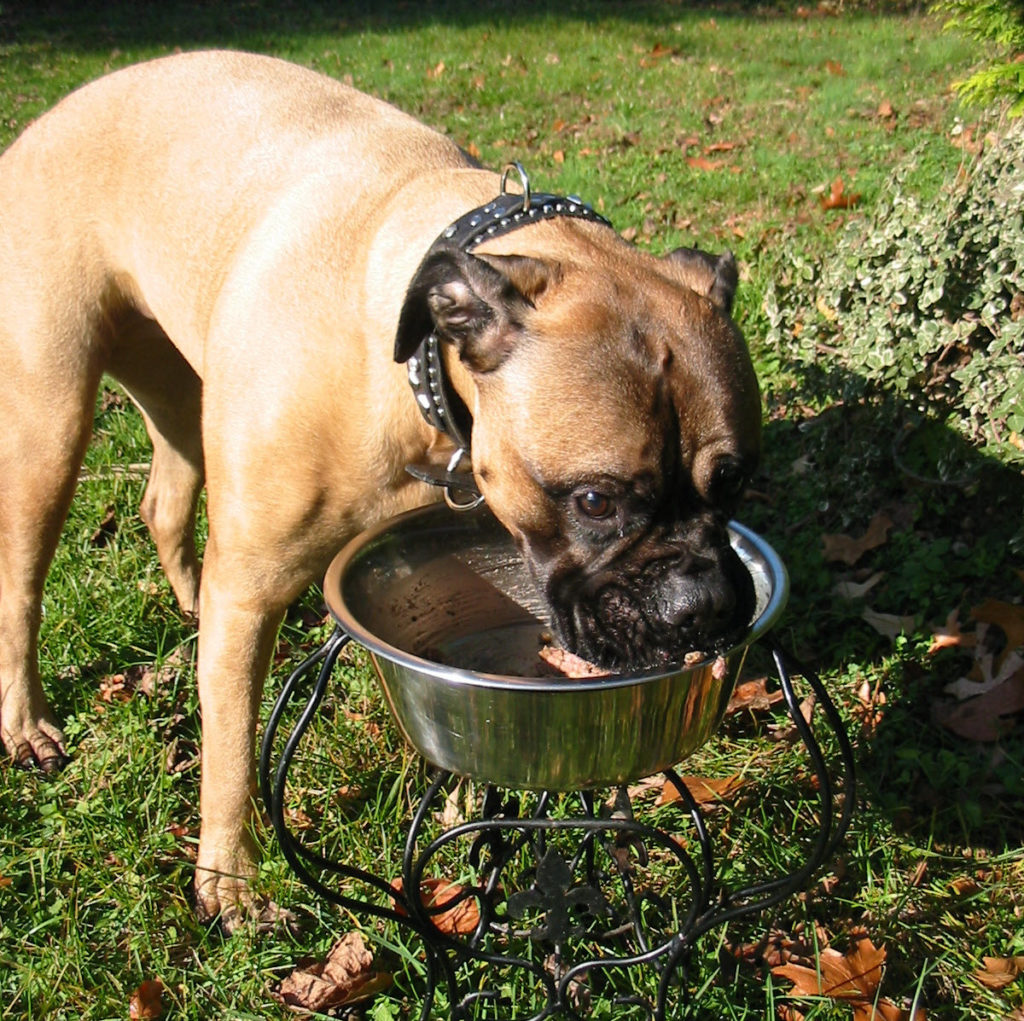 Do You Really Know What’s in Your Mastiff’s Food?

Dogs Will Try Anything! Dogs, especially puppies and miniatures, are so innocent of their surroundings that they‘ll try anything once, even if it‘s harmful. For example, dogs will even lick plants with insecticide on them out of curiosity! Just like snakes, dogs use their tongues to test the environment.

Dogs will try anything, even more so than cats, which are the most finicky pets you could own. So when you are putting out the dog food, chances are, even if there is something bad in there, if it tastes good enough, they‘ll consume the whole bowl and look at you to see if more is coming. And by the way, make sure you‘re not overfeeding your puppy. Don‘t feed your puppy scraps or your unfinished food. That‘s too much food for an animal that doesn‘t get out very much. They have nowhere to burn off the food and will get fat, quickly.

So if dogs can‘t tell you how their food tastes, or read the label to see if there is something in their food that might be hard on the kidneys or digestive tract; it is up to you, their owner, to carefully check what is in that dog food bag that sits in the corner. It is time for you to do some label investigation to make sure you are not slowly killing your dog with ingredients that still make it onto our shelves.


First, let’s understand the economics behind the making of dog food. Dog food manufacturers are in business for one main reason – and it’s not to make dog food! They’re in business to make a profit. Dog food is only what gets them to profitability. Once you know this, believe that if they can save money on manufacturing and beat the competition, they will. They don‘t do this because they want to hurt your pet. They do this because if they don‘t – the way their business model works – they will lose money and sell less dog food.

Have you been to the dog food aisle lately? Some stores have two or three aisles. There is huge competition on price and ingredients. You‘ll find your normal dog food; names you‘ve grown up with, and then you‘ll find newer, organic or special diet dog foods. So know that there is not a lot of concern going on for your dog – just marketing what may catch your fancy. But you need to be aware of what to look out for on those labels.

Since Fido will probably eat the same food day in and day out, it is important to look past the attractive labels and clever marketing. Current pet food regulation allows manufacturers to use ingredients you wouldn‘t feed your pet in you knew. Look for the word “by-products“ on the label. This can mean feet, bones, and intestines.

Because dog food manufacturers have to make sure the product won‘t spoil, typically 12 months, they include preservatives. Fats used in dog food would go rancid, so they use synthetic preservatives called butylated hydroxyanisole (BHA) and butylated hydroxytoluene (BHT), propyl gallate, propylene glycol which is also used as a less-toxic version of automotive antifreeze, and ethoxyquin. Look for these on the label. There is not much information documenting their toxicity, safety, interactions, or use in pet foods that may be eaten every day for the life of your dog. Propylene glycol was banned in cat food because it causes anemia in cats, yet it is still allowed in dog food.

These potentially cancer-causing agents such as BHA, BHT, and ethoxyquin are allowed at pretty low levels. Using these chemicals in dog foods has not been thoroughly studied, and long-term build-up of these agents could be harmful. Because of the questionable data in the original study on its safety, ethoxyquin‘s manufacturer, Monsanto, was required to perform a new, more rigorous study in 1996. Monsanto didn‘t find significant toxicity associated with its own product, but in July 1997 the FDA‘s Center for Veterinary Medicine requested that manufacturers voluntarily reduce the maximum level for ethoxyquin by half, to 75 parts per million.

The ball is in the air on ethoxyquin. Some pet food critics believe that ethoxyquin is a major cause of disease, skin problems, and infertility in dogs, others claim it is the safest, strongest, most stable preservative we have for pet food. And ethoxyquin is approved for human foods, preserving spices such as cayenne and chili powder, at a level of 100 ppm — but it would be pretty hard for even the most hard-core spice lover to consume as much chili powder every day as a dog would eat dry food. Ethoxyquin has not been tested with cats. Still, it is commonly used in veterinary diets for both cats and dogs.

What is the answer? What I suggest is that you contact suppliers who make dog food in small batches and ship them to your door. These companies are few and far between, but they do exist and they have higher quality ingredients with none of the dangerous preservatives. 7 Top Tips for Preventing Allergies in Your Dog - Mastiff Master - mastiffmaster.com says May 11, 2018

[…] brands of dog food. Take the time to read the labels on the brands you have been feeding. Certain artificial preservatives are known to have allergic reactions in canines. Those which use grape seed extract are a better […]