The Cane Corso Mastiff goes by many names; The most popular being Cane Corso Italiano, Siciliano Branchiro, and Rare Breed Italian Mastiff. But how did this Mastiff make it onto the scene?

The Ancient Roman Molosser, which looked much like the mastiff we know today, were used as war dogs and to hunt lions and ward off bears In Rome. Sometime after the fall of the Roman Empire, the ancient breeders started to crossbreed the hounds with the Molossers. The result was a shorter and athletic dog primed for working and functioning as a hunter and guard dog.

The breed continued to evolve with history and was commonly used in farm work throughout Italy. You’ll find the Cane Corso mentioned in Italian literature during this time. Unfortunately, the breed found near extinction with the decline of agriculture in Rome and other regions of Italy during the industrial revolution. But the Cane Corso found a revival with the help of passionate enthusiast breeders and the opening market of keeping dogs as pets rather than just practical work animals. 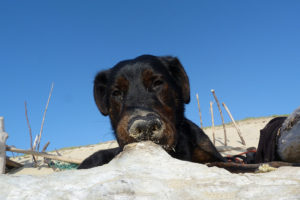 The Cane Corso is also known as the coursing mastiff of the modern age, as this particular breed can run almost without effort and has the nimbleness of dogs that are much smaller.

A Large dog may be an oversimplified description of the Cane Corso. The appearance is leaner and athletic than say the English Mastiff. The breeder standards set the Cane Corso’s highest part of the back at a range of sixty to high sixty centimeters. The weight of this breed ranges from eighty to one-hundred-ten pounds. The Cane Corso is bred for agility and power, and it will show physically.

You’ll find that the ears of most Cane Corso’s are cropped short and close to the head so that the stubs that remain stand upright. In the natural case, the ears will be a triangle shape and hang forward. The tail will sometimes be cut to the fourth vertebra or shorter, these are breeder standards, but pet owners usually like there Cane Corso in one piece.

The coat of the Corsos vary in color quite a bit but the most common being a fawn (yellowish-brown) and black. Marking may be found on the toes, chest, and chin in white; breeders preferring smaller patches.

The cane corso is relatively relaxed and quiet, but they do suffer from “separation anxiety” because they love being around their owners. Many claim this breed to be aggressive but, in my opinion, they are naturally reserved and will act indifferently towards strangers unless trained differently. So the Cane Corso makes an excellent companion.